Bouillabaisse in Cannes. The best bouillabaisse I ever tasted was in a restaurant in Cannes in the south of France. 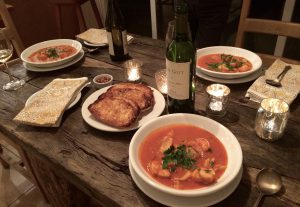 It was my 40th birthday and I traveled there to celebrate it with my husband at the time and his cousin Jeff who’s 40th was two days after mine.  It was October and relatively quiet. Bouillabaisse in Cannes.

Cousin Jeff picked us up at Nice airport in his tiny Renault car that resembled a sardine can with wings.  A raving madman was at the wheel and I loved him.  The salty breeze flowed through the windows and the sun shone as we sped along  passing Antibes where we would be staying for a month. We drove on to Juan Les Pins with the radio on blasting  Peter Sarstedt  (RIP) singing “Where do you go to my lovely.”  his classic hit from 1969.  My sister had the single and played it nonstop when I was a kid. It was a perfect moment and a dream come true. I was in France and was about to eat the best bouillabaisse ever.

Jeff parked practically on top of another baby car outside the restaurant and honestly they looked like they were copulating.  Everything you’ve ever heard about European drivers is true.

We were seated outside with a chilled glass of Rose that hit the spot. It was good to see an old friend and catch up on our lives with the spectacular french Riviera in view. The sea sparkled in the sunlight.

Jeff ordered a bountiful feast of the freshest seafood. Plump oysters in abundance were served with fat lemon wedges. plenty of fresh crab and mouthwatering prawns that tasted out of this world. 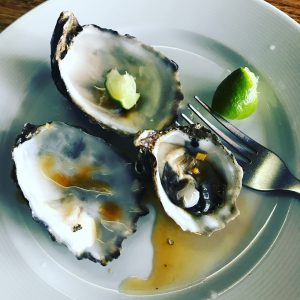 I ordered the Bouillabaisse, something I had longed to taste in the land of its birth. Marseille was where it originated from.

Back in the day the sailors made the soup with the catch in their nets. These days purchasing Lobster, crawfish, sea bream, Langoustines and whatever else you want in there will be costly. There are many variations of this soup. I make the same soup base and vary it up with the seafood.

When the Bouillabaisse arrived to the table it came in a pot with a burner underneath, the aroma of leeks and onions, garlic and tomatoes was so good I swooned with excitement. The soups color was a rich rust from the infusion of saffron. Along side the broth a large platter was piled with an assortment or fish, shellfish, crab, prawns and lobster. A crusty baguette sat in a basket and a dish with two sauces. One a Rouille which is a spicy sauce made with garlic, fresh red chili pepper olive oil and a pinch of saffron . The other sauce an Aioli, is made from egg yokes and mass quantities of garlic and olive oil.  I choose to have mine naked with just the broth.

When I tasted the soup it transported me to the depths of the mediterranean the flavor of the salty sea was fishy, robust and unforgettable. Out of the corner of my eye I noticed an elegantly dressed older woman sitting alone sipping a glass of chilled white wine. The waiter was very attentive to her and presented her lunch with a flourish.

In the hot pan i noticed a whole sole sat in browned butter. He expertly deboned the fish and left the fish intact. then nodded and left the madam to her lunch. Apparently she was ninety five years old and ate and sat at the same table with her husband for decades. He had recently died, and she still came for lunch every day by the sea.

6 pounds of a variety of fish, Ask the fishmonger to scale and gut the fish and remove the heads. reserve the heads and bones to make your stock.  he can cut the large fish in chunks and leave the smaller one whole. The fish of your choice such as

Add tomatoes, celery, carrots, leek and onion and stir cooking until the veggies are slightly colored.Add the herbs, bay leaf, garlic, orange peel and parsley and stir, then add the saffron, salt and pepper and stir for a couple of minutes. Add the wine and simmer gently for about 45 minutes.

puree the remaining tomato mixture in food processor or blender. Wipe out the saucepan and return the soup bring to boil over low heat. Add the firmer fish first and then add the softer keep it at a soft boil. Add the crustaceans. Simmer for 10 minutes. In France they serve fish and soup separately so if you choose to do this remove the seafood with a slotted spoon onto a large platter. keep warm. Pour the soup into a tureen and serve piping hot, along side the fish. Otherwise serve it all together its delicious either way.