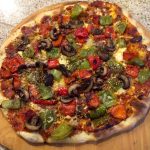 Tango class tonight and Pizza is on the menu for early eats. That way we can dance it off from 7 till 8. Bill is in his element in the kitchen making the dough and it now sits puffed up, smooth and soft to the touch. He grew up in the suburbs of Chicago and has a passion for it’s street food like Italian Beef sandwiches. I will leave that one for another post. His favorite pizza is sausage, green pepper and mushroom and he slips in some anchovies when I’m not looking. He likes them a lot and I like just a hint to taste. He tends to lean on the more the merrier in toppings, and I like about three ingredients. So sometimes we have two pizzas and share the leftovers or have friends over. He has made, god only knows, how many crusts with different flour over the years in search for the perfect one.  A nice crisp crust that bubbles up with a good chew. Lately he started to double bake the crust and its darn good. All our pizzas are baked on a stone in the Napoleon Grill outside and they cook in 8 to 10 minutes.

As it happens Bill had to go to his studio and work on some plans, and I ended up finishing the pizza. So using Bill’s homemade pizza sauce I opted to make it without the sausage and used fresh organic mushroom and red and green bell peppers, pecorino, some creamy brie dotted here and there and a scattering of oregano, fennel and hot chili peppers. It was full of flavor with the sweet juicy peppers and the woodsy mushrooms.  In fact it tasted sublime, and we shared it with our Airbnb guests in the cabana with the stars popping out in the night sky.

note: This pizza can be made on the pizza stone in the oven, it has to be super hot the hottest it can reach.

Crumble the sausage  breaking any lumps and saute in a dribble of olive oil until golden about 6 minutes. remove and set aside.

Saute the peppers in the olive oil for about 5 minutes and blacken a bit, add the garlic and cook for 1 minute with the peppers then set aside.

Saute the mushrooms till nice and brown and set aside.

Spread the pizza sauce evenly over the parbaked pizza crust

Scatter the sausage over the sauce, them the peppers and mushrooms

Sprinkle the cheese evenly over the pizza

Pop the lid down on the grill and bake for 8 minutes check the base to see if its done, if ready slide the peel under the crust and remove and set on cutting surface and slide the pizza off.

There is much-to-do about the method of slicing pizza in our house. Chicago-style is cut in squares and if Bill’s making it, that’s how it is.